Presentation of the project

Aquaculture is the fastest growing food production sector, but it is significantly constrained by infectious diseases. Impact of viral infections on fish health and welfare is particularly strong, involving important economic losses, and only few vaccines are available. Therefore, it is of paramount importance to develop new vaccines to prevent fish viral diseases for the development of a sustainable aquaculture.

Experimental DNA vaccines against fish viral infections have been developed, some providing high protection but they are injected and cannot be easily administered to young fish. Importantly, several DNA vaccines have been recently made commercially available but remain expensive. mRNA vaccines hold much hope, but they are just beginning to be tested in fish. In mammals, they often induce strong responses and good protection. They appear to be fast to produce and safer than DNA vaccines as they should not integrate into host genomes.

In this context, the NucNanoFish project proposes to establish a nucleic acid platform using biodegradable nanoparticles for efficient delivery of vaccines, through intra-muscular (IM) or oral/immersion routes, against to well-known viral diseases of several European farmed fish species. We have selected four different relevant host-pathogen models through cutting edge expertise of each consortium‘s partner. NucNanoFish will design, produce and test DNA/mRNA nucleic acid vaccines loaded or not onto safe-by-design LipoNanoParticles (LNP). LNP are based on a PLA/PLGA (Poly-Lactic/Glycolic Acid) core surrounded with a lipid corona. We hypothesize that their efficient uptake by mucosa or the recruitment of Antigen Presenting Cells (APC) at the site of injection will favour a protective immune response at the portal of entry of each relevant virus. To achieve these goals, NucNanoFish has assembled a consortium of six partners, with highly complementary expertise: one in nanodelivery of antigen and mRNA using LNP, four groups of fish immunovirologists / vaccinologists and a biotech company in DNA production.

We have selected 3 fish species: rainbow trout, common carp and

Then, we have identified 6 work packages to address this innovative project:

1) Different batches of LNP with DNA or mRNA encoding reporter proteins, or viral antigens (Ag) will be produced, down selected and validated for their expression in vitro using fish cells. 2) The biodistribution of LNP-DNA / mRNA vaccines after administration by IM, oral or bath route will be characterized and their nanotoxicity evaluated. 3) The induction of immune responses (both systemic and mucosal) after administration of LNP-DNA and mRNA vaccines by IM injection will be characterized in 3 models: VHSV and IPNV in rainbow trout and CyHV3 in carp. Strength of adaptive B and T cell responses will be assessed, including in-depth analysis of endogenous type I IFN expression at site of injection. 4) Responses induced following oral vaccination (IPNV in rainbow trout and SAV in Atlantic salmon) or bath (CyHV3 in common carp) will also be characterized, both at systemic/mucosal level. In particular, the effects of diet-associated gut conditioning on LNP uptake by gut, and induction of adaptive immunity will be studied, in the SAV/salmon model. 5) We will use challenge models (already available in each project partners) to test the protection afforded by vaccination using relevant LNP formulations. and 6) Management : Combining all data, we will develop a versatile vaccine platform to control fish health in aquaculture in a context of environmental change, and emergence of new and more virulent strains that spread in naïve populations due to global trade. 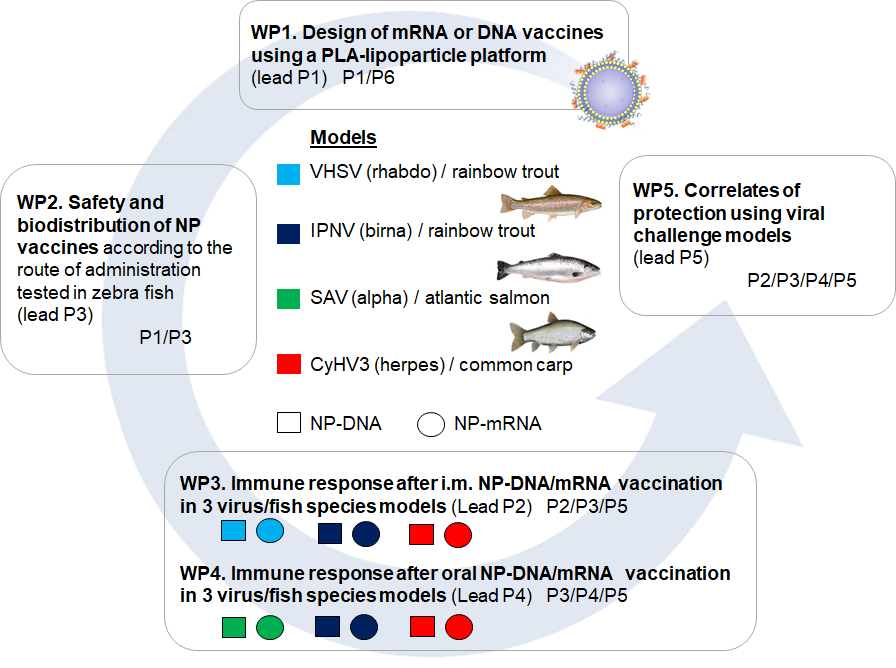